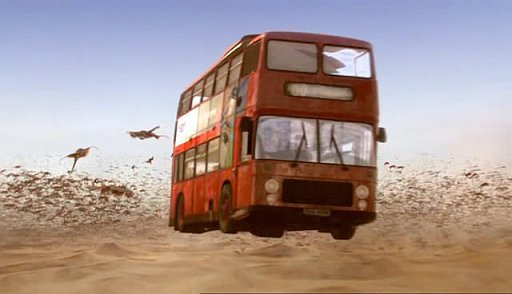 ...an ex-Alder Valley Bristol VR of course!! Could this be the most famous ECW rear dome ever? I have known for a little while that two Bristol VRs were to star in the Easter Special episode of Doctor Who but was sworn to secrecy by my contact. However, last Friday the above photo was published as the headline item on the BBC's Doctor Who website and shows David Tennant alongside Michelle Ryan at the rear of the top deck of HJB455W. I know it is this one because the other one (RUA461W) has been shipped to Dubai for filming in a "different" environment. Sadly RUA was extensively damaged in transit (a 30' container was dropped on it) and it will be a write-off after temporary repairs are effected for filming. HJB remains in Wales for filming in more "normal" conditions. Latest news from Peter Newman is that a third VR (GGM 84W) has been supplied to replace RUA and is believed to be on its way out to Dubai, which means there will be an Alder Valley VR at both ends of the filming! In addition a photo has come to light of the damage to RUA and it is very serious! There has been lots of media coverage of "the double decker wrecker", including:

The two VRs remaining in the UK have turned up in Wales and the BBC are looking to sell them either for scrap or to a preservationist. GGM84W never made it to Dubai and is instead confirmed as the one damaged on purpose as the studio "double" for RUA461W, whilst HJB455W appears largely intact. Where will they turn up next?

Well, the answer arrived on February 16th 2010 when I was contacted by James Denny of Worlingham, Suffolk to say that he had just bought both GGM84W and HJB455W. GGM is of course for spares use to return HJB to working order. James is a big Doctor Who fan, not to mention the two VRs he already owned (NAH135P and GNG710N) so this is a match made in heaven!